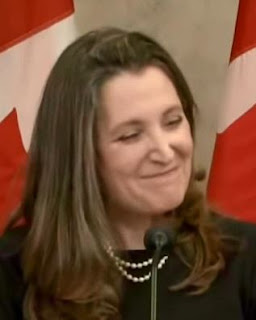 Why is the 'opposition' and the Canadian Public giving this pair a free ride. Spending Canada into oblivion without any accountability.
In a rare piece of Canadian reporting Bill Curry of the Globe and Mail calls out the fact this Finance Minister is not being held accountable for the Canadian budget. The delays in reporting to the taxpayer should not be tolerated by either the Canadian taxpayer or the so-called Official Opposition .
Where are the voices of those who are supposed to hold a government to account? Where is the fifth estate (hard to call out the government that pays your bills). The Canadian Taxpayer Federation? They raise money for this and that, but don't seem to accomplish anything. The 'Official Opposition' which for the most part just looks like an extension of the Liberal cabinet, joined by the feckless NDP and Greens.
Of course the pandemic is going to be blamed for this whole disaster, but without seeing exactly how this government spent $400 Billion more than it took in that is just a smokescreen.
This Finance Minister seems to delight in being able to identify anyone who gave $50 to the freedom convoy but can't account for a $400 Billion deficit.
Ms Freeland that is truly UNACCEPTABLE.