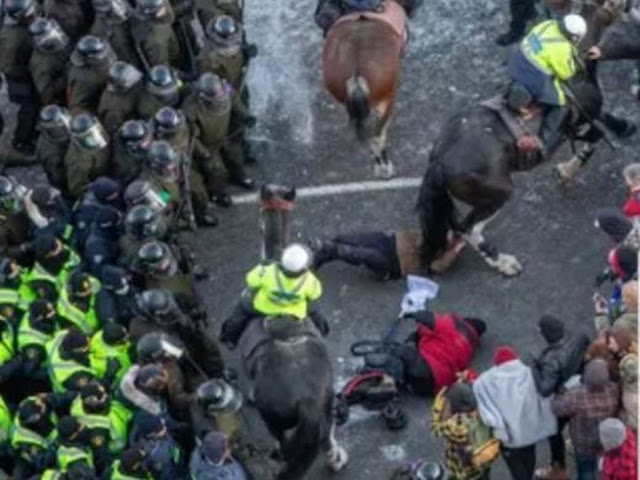 In spite of the lies being spewed by the government-bought legacy media for the past three weeks there has been no violence in Ottawa associated with this patriotic protest. These people are freedom loving patriotic Canadians to whom all of Canada owes a debt. They have been maligned and slandered by a Prime Minister that is acting like a third world despot.

The Emergency Act he invoked by all standards is not legal and should not go unchallenged in future months. The events in Ottawa never reached the threshold laid out in the Act, which has never before been used in Canada. It was supposed to be radified by both the House and Senate as a safeguard against abuse such as we now see Trudeau exercising.

As of this writing it is not known how seriously these victims have been injured. One report claims one had even died. This whole tragedy is an example of a Prime Minister totally drunk with power. These kind of actions all of Canada would have once condemned had they happened in another country.

The only good that may come from this disgraceful and dark page in Canadian history is that it might at last wake up the apathetic average citizen who is sleepwalking to the cliff.

To finally read an honest account of what is happening in Ottawa read this truthful article by Joe Warmington who is an actual investigative reporter.