CANADA Is A Fallen Nation

In 2022 nothing has changed in CANADA

Except we are closer to full oppression 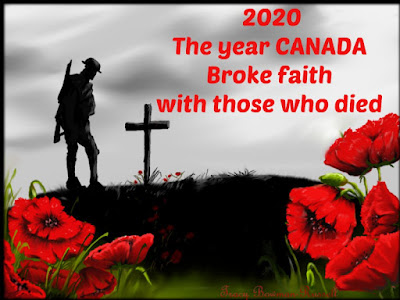 This year 2022, Canada has decided to no longer resist the forces of tyranny that seek to enslave mankind once again. We are throwing up our hands and welcoming our oppressors as we cower in fear.

Inflated numbers, suppression of truth and constant propaganda are being used to make a nation so fearful of dying, it is welcoming  it’s oppressor with open arms. That oppressor is not coming with guns and tanks from afar, it is coming from within our own country. It is coming from the very seats of power that should be serving and protecting the people.

The only remedy to escape from this fear is contained within our National Anthem "God Keep Our Land". That is the ONLY hope for each of us individually and the only hope for the Dominion of CANADA. We need to repent and turn our faces once again to GOD and cry out to Him to heal our land. He was revealed in this nation through the Lord Jesus Christ Whom we have thrown out and embraced all manner of gods.

This Remembrance Day give remembrance to the thousands of Canadians who have given their lives so we could live in Freedom. A Freedom we have so casually and cowardly thrown away, to our hurt. A freedom that was expressed in a national convoy that was crushed by a form of government we never thought we were electing.

CANADIANS have broken faith with those who died