Residential School Graves - What the Media Got Wrong 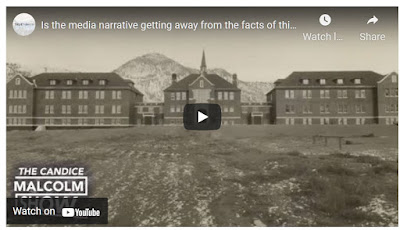 TRUE NORTH Editor-In-Chief Candice Malcolm itemizes 6 things the legacy media in Canada have gotten very wrong in the way they have handled the Residential School Graves story. The MSM has done a trememdous disservice to all Canadians, especially First Nations.

1. Unverified reports: to this day there have been no reports open for public consideration to support the press release claiming the finding of 215 unmarked graves.

2. What Exactly Was "Discovered" - to be clear nothing was uncovered, No 'bodies' found. No excavatiion, nothing unearthered, nothing was removed and no identities were made. Ground penetrating radar does NOT see bodies.

3. We don't know whose graves were discovered: In both Cowessess and Lower Kootenay. the graves are believed to be community cemetaries belonging to both First Nations and the broader Canadian community,

4. Not Mass Graves: All three chiefs have clearly stated these are not mass graves. The use of the term mass graves is wrong and it is reckless.

5. Cause of Death: many of the children died of natural causes. The Truth and Reconciliation Committee report in 2015 said the number one cause of death was Tuberculosis.

6 It is possible these were not unmarked graves: Wooden grave markers which were and are still the norm among First Nations communities in Western Canada erode and disintegrate over time. It is possible these graves were marked at one time. Sophie Pierre former chief of St. Mary's Indian Band said they has always known the graves were there. The fact there are graves within a graveyard should surprise no one.