Experts Call For Suspension Of Vaccine

China health experts say Norway and other countries should suspend the use of mRNA vaccines like those produced by Pfizer and Moderna, especially among the elderly, according to Global Times.

Norway health officials said last week they were investigating the deaths of 23 elderly people who died shortly after receiving the vaccine, and had confirmed 13 of those were directly related to the vaccine.

Today, Bloomberg reported that the number of deaths under investigation in Norway had risen to 33 and that all had occurred in people ranging from age 75 to 80. According to Bloomberg, Camilla Stoltenberg, head of the Norwegian Institute of Public Health, said at a press conference today:
Read More 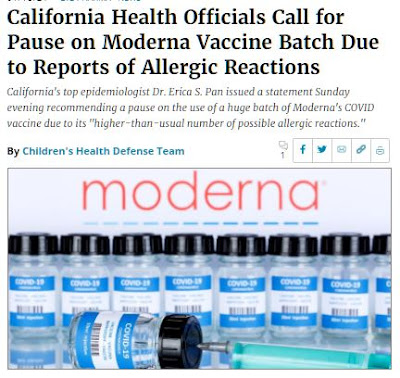 California health officials are calling for a pause on the use of a huge batch of Moderna’s COVID vaccine due to its ”higher-than-usual number of possible allergic reactions.”