The Great Reset Is Trudeau's Ideology 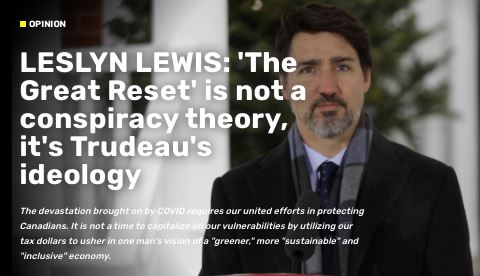 Dismissing an argument or concern as a "conspiracy theory" is often a tactic used to silence the inquirer. We’re seeing that play out right now with disagreements over "The Great Reset," and what it means. What we know is that governments around the world have adopted the concept into policies which tout the "Reset" or "Build Back Better" slogans.
The "Reset" debate emerged from the book COVID 19: The Great Reset by Klaus Schwab, the founder and former Executive Chairman of the World Economic Forum, and Thierry Malleret. The authors pose the simple question: what kind of post-COVID world do we want to create?
Prime Minister Justin Trudeau virtually delivered a speech in September at the United Nations in which he outlined the kind of Canada he envisions, using language that clearly was inspired by the book or, at a minimum, its philosophy.

"This pandemic has provided an opportunity for a reset. This is our chance to accelerate our pre-pandemic efforts to reimagine economic systems," the prime minister explained. Fast forward to November, and the prime minister deflected questions about his language choice, choosing to make the case that if people raised concerns about his wording, they were embracing conspiracy theories. This seems like an odd approach to take, since in the lead-up to the prime minister’s speech to the UN, in August 2020, the Bank of Canada also put out an economic document titled "The Great Reset: Supporting the transition to a greener, smarter economy."
READ MORE