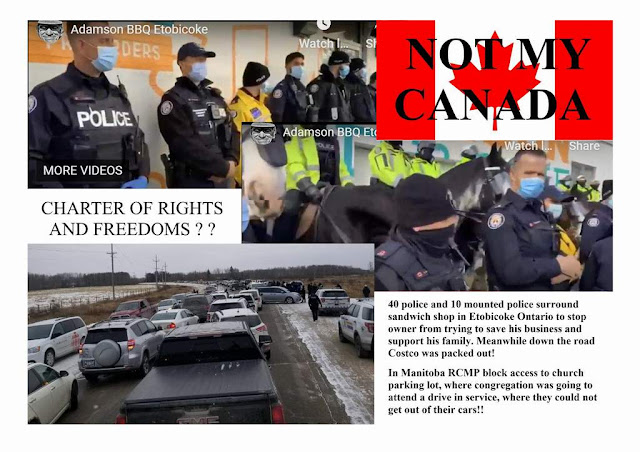 This past week, the respect for law enforcement and the thin blue line took a body blow as a massive police force was deployed in Etobicoke Ontario and in Northern Manitoba as the strong arm of an oppressive government was on full display.
A sandwich shop owner in Etobicoke trying desperately to save his failing business and support his family was subjected to a police presence you would expect to see in a communist dictatorship but not in CANADA.
Meanwhile in northern Manitoba an RCMP force was present to block church goers from attending a drive in service where they would have to stay in their cars. They chose to pray on the road.
These are two examples of what Canadians can look forward to as democracy becomes just a fond memory as those in power piss all over the Canadian Charter of Rights and Freedoms.
Make no mistake, the next step will be a form of forced vaccination complete with anti-propaganda propaganda coming from the Canadian Forces.
Is it too late for Canadians to WAKE THE HELL UP??