Of 35 reporting countries Canadian mortality rate of 3.9% puts it in position 31 with only four other countries with higher mortality rates. Only the UK, Italy, Iran and Mexico ranked higher. To be clear, ranking higher is not a good thing.

Compared with the mortality rate in the USA Canada's 3.9% compares with 2.3% in the USA. This clearly means your survival rate is considerably higher if you are being treated in the USA.

Putting this in perspective for the 5 months ending in Sept. 1.6% of people tested were positive and of those 3.2% proved fatal. The vast majority of these deaths occurred in care facilities among the elderly.

Two months later 1.9% of those tested were positive  and of those 1.6% proved fatal.

During the first 5 months the province was testing on average 80,942 people per month, assuming each test was for one person and not multiple tests on the same person. The number of tests per month from Sept. to Nov. was ramped up to 241.939 tests per month. 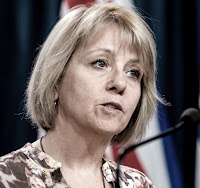 Do the stats support the society crushing measures that Dr. Henry has been advocating?

Considering that less than 2% of those tested result in a positive result (remembering the PCR test has a high false positive rate) it would seem hard to justify the extreme social impact the 'treatment' is having on society as a whole. That impact seems something Dr. Henry and other un-elected officials seem to completely ignore. A troubling fact since they are supposed to oversee public health which is much broader than dealing with one virus.
From the start of the year until Nov 8 BC is attributing 275 deaths to Covid which when compared to drug overdose deaths seems insignificant. During this same period how many have died from cancer, heart attack, stroke, drug and or alcohol abuse, suicide etc.
How many people's lives have been destroyed due to business failure, loss of employment, failed mortgages, facing homelessness and credit card and other debt that is simply over whelming.
You have to wonder if Dr. Henry and others in government are really totally unaware of the hardships these 'treatments' are causing or if they aren't actually engaged in a plan to destroy the Canadian economy and way of life making way for a completely new form of government? That form of government can be seen in many other countries around the world where communism rules the day.
It could explain actions which don't seem to make sense for any other reason.