CANADA Ignores God - To Our Peril 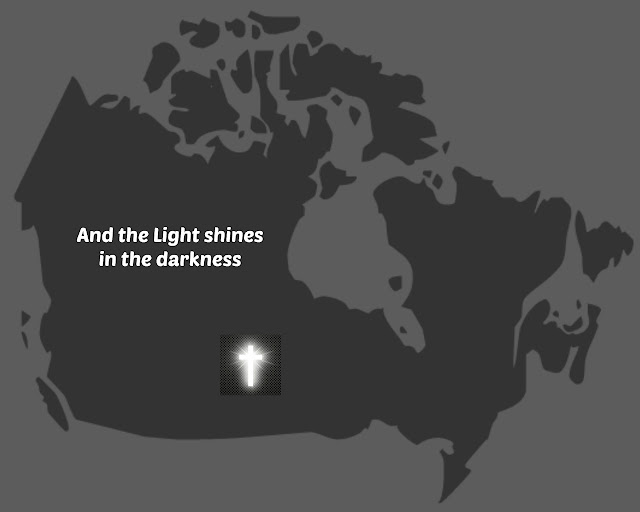 Peril is defined as "Imminent danger, exposure to the risk of harm or loss". That perfectly describes the current place where Canadians find themselves.

The god of this age has perpetrated a masterful tactic on Canadians, in that he has been able to convince us that he really doesn't exist. We have been convinced that the reality of the devil is only for superstitious,backwards, uneducated types who simply don't know any better.

His second masterful tactic is to take advantage of our arrogance and folly of trusting in how 'smart' we are in this age of technological and medical advancement. We have become so intellectual and self-sufficient that we no longer have any need for the God who has created the heavens and earth and all that is within them.

The god of this age has taken captive all those who do not have knowledge of the only true God who was revealed in His only begotten son Christ Jesus. He also takes captive Christians who believe Jesus did die for their sin, thus assuring them of heaven, but they deny the power of His resurrection working in their lives in the here and now.

They accept the forgiveness of sin but do not believe that complete freedom FROM sin is even possible. The god of this age is able to keep believers in a cycle of sinning and repenting, sinning and repenting. This keeps them from coming to the full knowledge of the Son of God and what He actually accomplished through His death, burial and resurrection.

While the vast majority of Canadians ignore God completely even those who would profess to be Christian deny the power of His resurrection. This results in our once God-fearing, God-blessed nation descending into the darkness of a heathen nation.

We have put heathen kings in place over us, another example of the tactics of the god of this age working to enslave us and keep us from the Light. He, the god of this age, has also put godless men and women in leadership in the institutions that would claim to be Christian. Hence the Name of Christ is slandered as evil is done in His name by those proclaiming to be Christian. The inquisition is an extreme example from time past as is residential schools from more recent times.

The god of this age is forever accusing God before man as yet another tactic to keep men from coming into the Light in the here and now. The devil prefers to keep people in total darkness, serving him thus taking them captive at life's end into his kingdom. He is not worried when someone does believe in Jesus as long as he can keep them from knowing the power of His resurrection. Powerless Christians are no threat to his kingdom.

God is not mad at any of us and as a loving Father has extended His grace and forgiveness and loving kindness to us, in the sacrifice of His only begotten Son, Jesus the Christ. He knows we will never to 'good enough' which is why He went to the extreme measure of allowing His only Son to die in our place, so that we would not have to die because of our sin.

The penalty of death, which our sin deserves, was paid by the death, burial and resurrection of Jesus the Christ for all of mankind. The only caveat is that we simply believe in the Name of Jesus and ask His forgiveness of our sin.

He could not have made our salvation any easier, from our stand point, or more painful from His.

God turned His back on His only Son when He was beaten beyond recognition for our healing, and then killed on a cross for our sin and then descending into hell itself so that we would not have to. The sin-debt of all mankind was fully paid in Christ Jesus and the only reason any of us will go to hell, is turning our back on that truth.

CANADA right now, is in great peril unless we once again turn our face toward God and invite Jesus to come and take His rightful place in our nation.