on September 02, 2020
Organizing a peaceful protest
results in arrest and seizure of property
This pregnant mother of two was handcuffed and arrested for the crime of 'incitement' for having the nerve to try and organize a peaceful protest over the lock down being imposed where she lives.
This is a screen grab of the offending post which resulted in being arrested by two masked (I presume regular police), put in handcuffs and had all electronics in the home seized, regardless of whose property they are.
At this time the actual fate of this mother has not been reported and given she doesn't likely have any means of communicating, it could be sometime before the actual outcome is known.
It is hard to believe that in a non-communist country such harsh measures would be the result of trying to organize a peaceful protest. You can hear in the video her husband asking why she was not just ordered to remove the post rather than getting such harsh treatment.
This is the offending social media post: 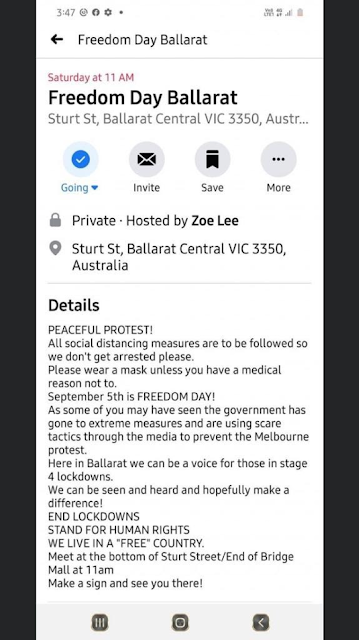 I am loathe to use inflammatory or sensational language but in this case I think it is fair comment to ask if this is an example of honest policing or an example of the Australian GESTAPO at work?
For those of us in Canada who see all the masking and quarantine steps as just being about our health, we might want to stop and think how many of our freedoms we are willing to just roll over and give up. In BC there have only been 209 deaths since the first of the year that are said to be Covid deaths. The vast percentage of the fatalities were people in care facilities, with other health issues and advanced in years.
To be put in perspective, almost as many people have died from drug overdoses in one single month.
The measures being taken are disproportionate to the threat this virus poses in spite of the nightly body count by the charming Dr. Henry or the Hon. Adrian Dix.
To my knowledge there has never been an in-depth analysis of what is really going on with the way 'Covid-19' statistics are being reported in this province, That in part is due to the total lack of a serious news media in the province.
It has just been revealed by the CDC that only 6% of all deaths in the USA that were classed as 'Covid' deaths were as a result of Covid alone. On average people had 2.5 other conditions that resulted in their death.
I doubt if the statistics in Canada are likely any different.
Australian lockdowns Australian Police Covid lockdown mother arrested