DOES HISTORY REPEAT ITSELF?

Fiddling while your nation burns 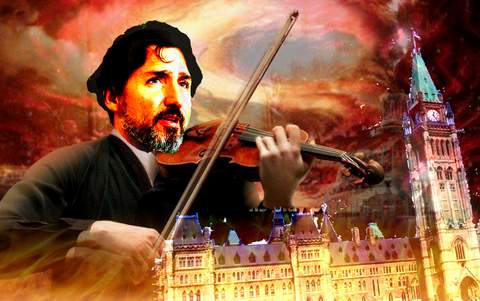 The 'pandemic' resulted in Parliament basically being suspended for most of the year during which time the Prime Minister engaged the WE charity with a near one billion contract. That deal blowing up in his face when family connections and awarding what is a huge sole source contract to friends with family ties became public. That scandal is still under investigation.
Having already taken 48 personal days this year the Prime Minister did not see fit to attend the four hour sitting of the House this past week. It would have been one of the rare times the government would have been subjected to a question period. That question period was only scheduled to last 95 minutes.
Given the dire state of Canada under the current crisis and this government's apparent lack of any plan to guide the country back to some form of stable economy one has to question what motivates the Prime Minister?
What is his agenda? I guess that is a question he won't have to answer either given the only questions he will field are the softball lobs from his paid propaganda machines.