Corruption In Once Trusted Institutions 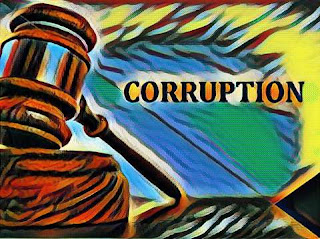 According to Merriam-Webster
corruption noun

1   a: dishonest or illegal behavior especially by powerful people (such as government officials or police officers) : DEPRAVITY
b: inducement to wrong by improper or unlawful means (such as bribery)the corruption of government official
c: a departure from the original or from what is pure or correct
While none of the above meet the definition under the law of corruption perhaps "c" aptly describes what has happened in all 'once trusted' institutions in that they have departed from the original.
Two areas of society where corruption is most glaring and grabs the headlines would be in police forces and politicians. That is not to say that all police officers and all politicians are in themselves corrupt but it could be argued that the institutions which tolerate corrupt behavior are in themselves corrupt.
An area where departing from the original is quite obvious is in the civil 'service' institutions who exist to 'serve' the public. It could be argued that given the differences in wages and benefits that the public now serves the civil service.
What is happening within the Canadian parliament  and in fact all levels of government highlights levels of corruption once thought impossible in this nation.
The common denominator in all of our institutions is that they are being overseen by a corrupt population. That is the heart of the matter and at the heart of that issue is a population that no longer gives place to God.
The cold truth of the matter is that once we remove the fear of God from our midst we devolve into the corrupt, sinful creatures we are at heart. The utter corruption in our institutions testifies to the corruption of man's heart.
Before the flood of Noah's day it is told that God was grieved in His heart that He had made man on the earth: "And GOD saw that the wickedness of man was great in the earth, and that every imagination of the thoughts of his heart was only evil continually." As a result Noah received instruction which saved himself and members of his family. The rest of mankind was cleansed from the earth by flood."
God promised He would never again destroy the earth with a flood, and as a sign of that covenant He put a rainbow in the sky. "And God said, This is the token of the covenant which I make between me and you and every living creature that is with you, for perpetual generations: I do set my bow in the cloud, and it shall be for a token of a covenant between me and the earth."
Only the corruption in the Christian church has allowed the sign of this covenant with God to be appropriated.
The only reason that God did not wipe mankind from the face of the earth permanently, is because He had a plan to restore His creation but at a terrible cost. It was however the ONLY way that God could redeem mankind because: "As it is written and forever remains written, "THERE IS NONE RIGHTEOUS [none that meets God's standard], NOT EVEN ONE."
The terrible price that God was willing to pay to restore His creation was through the sacrifice of His only begotten Son whose death would pay the price for the sin of all of mankind.
Only by accepting the message of salvation, which comes through the death, burial and resurrection of God's only Son can we be saved from eternal damnation. There is NO other way.