WE Affair Gets More Suspicious 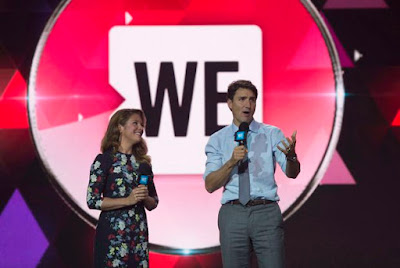 Former WE Chair (14 yrs) Resigns
says all board directors in Canada and US
resigned or replaced in March 2020
In an exclusive Globe and Mail interview Michele Douglas who had been chair for fourteen years says she resigned after 'concerning developments' at the organization.s
Douglas will testify before the House of Commons finance committee which is investigating the $912 million contract the Trudeau government gave to WE under what is now becoming questionable circumstances.
Ties between Trudeau and finance minister Mourneau with the organization are calling into question concerns about conflicts of interest with their association with WE. Most recently Mourneau repaid $43,000 he owed WE from 2017. The fact he did this hours before it becoming public, made his excuse seem shallow.
This is one story that will not likely just 'go away' as did the SCN scandal of last year.
To subscribe to Canadian Sentinel for FREE simply click  SUBSCRIBE at the top of this page, Enter your email address and Canadian Sentinel will be sent to your inbox.
Trudeau WE Scandal WE WE Scandal