TRUDEAU FACING ANOTHER SCANDAL - WE 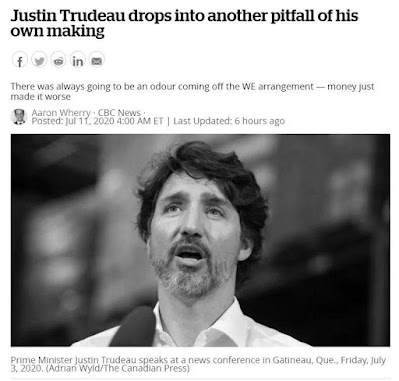 Justin Trudeau and his government have shown a remarkable ability to find trouble in novel places — a Christmas vacation, the Shawcross doctrine and the possibility of a deferred prosecution agreement for SNC-Lavalin, the prime minister's choice of attire during a trip to India.
And now, a national program for student volunteers.
News that a subsidiary of the WE Charity paid Trudeau's mother and brother for speaking engagements raises further questions about the government's decision to enlist WE to disburse the funds from that program — and the prime minister's apparent involvement in signing off on that decision.
READ MORE
Justin Trudeau Politics SNC Trudeau Trudeau breaks own rules