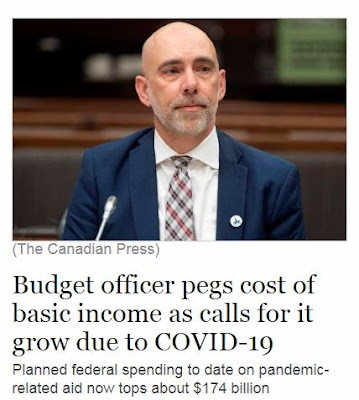 Follows are snippets from CP story. READ MORE
Providing almost all Canadians with a basic income for six months beginning this fall could cost about $98 billion, the parliamentary budget officer said in a report on the eve of a preview of how COVID-19 will shape government spending until next spring.
The idea of giving a government-guaranteed basic income to Canadians has gained steam as millions have watched their jobs or earnings evaporate in the COVID-19 pandemic.
Providing six months of a basic income starting that month could cost between $47.5 billion and $98.1 billion, depending on how much of the benefit is clawed back from people whose other incomes increase.
Budget officer Yves Giroux’s report says the average benefit to Canadians aged 18 to 64 would range between $4,500 and $4,800, with the number of recipients depending on the phase-out rate.
“It’s a huge undertaking to launch a basic income for the whole country on a permanent basis. The costs are extremely high and the political resistance is likely to be fierce, but we are in a period where it is likely we will have to spend large sums of money on income support going into the balance of 2020 and into 2021,” Woo said in a telephone interview.
The Canadian Federation of Independent Business, which represents small businesses nationwide, said Tuesday that about one-third of members responding to a survey reported being back at full staffing levels, but suggested many believe it will take six months to get back to normal profitability.
YANKEE APPROACH GET EVERYONE BACK TO WORK!

June Job Numbers Shatter Expectations
Our Nation’s economy has broken another record as 4.8 million jobs were added in June, bringing the economic comeback to 7.5 million jobs added over the past two months, according to the Bureau of Labor Statistics’ June Employment Situation report.
May and June rank as the two largest monthly jobs gains in history, with June’s numbers exceeding expectations once again. In June, nearly every major employment sector enjoyed a gain in jobs, with the leisure and hospitality industry seeing a gain of 2.1 million and retail trade increasing by 740,000. These gains likely reflect the reopening of State economies from May (based on the work week including May 12) through June (based on the work week including June 12).
READ MORE
Canada Canadian budget Canadian deficit Canadian economy CERB