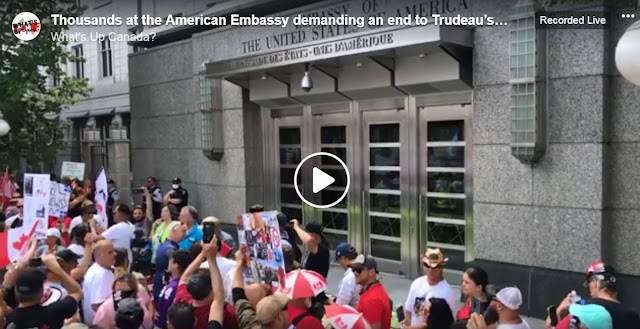 To view video on Facebook click HERE
Thousands of Canadians marched to the United States Embassy in Ottawa on CANADA DAY requesting the US investigate corruption in Canada, with reference to alleged criminal activity by Prime Minister Trudeau.
Under the new USMCA trade deal which comes into effect on July 1/20 both the US and Mexico are compelled to investigate criminal charges and corruption within a trading nation.
Mr. Norman Traversy who has exhausted avenues in the Canadian courts to bring criminal charges against the Prime Minister related to the SNC affair; has resorted to this measure to compel our trading partners to investigate the corruption in Canada.
If you are not familiar with Mr.Traversy and his fight for justice visit his website where you can learn all about his epic struggle against the injustices within the Canadian legal system at the highest levels.