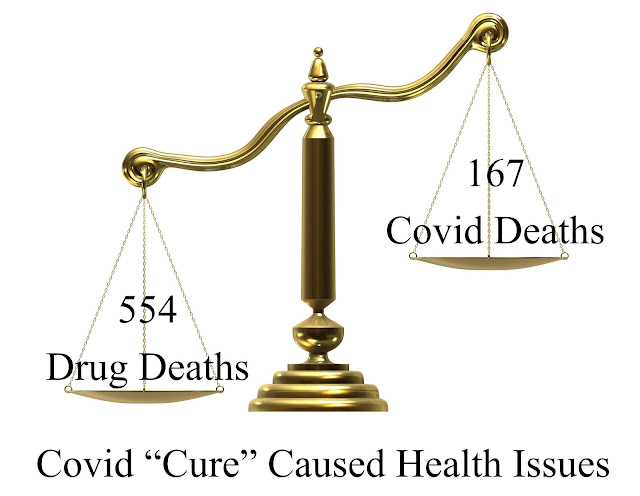 Clearly people have been dying as a result of drug abuse long before Covid came along. A case could likely be made that the measures to deal with Covid have contributed to an increase in the number of drug deaths.
The number of other health issues and deaths that are collateral damage will likely never be known, and if known, never revealed for public scrutiny.
If it turned out our leaders nearly completely destroyed out nations for what is arguably a very bad flu season they would never allow that information to come to the surface.
Given the current state of 'journalism' in the nation, don't expect any revelations coming from serious investigative journalism any time soon.

Panic, Fear and Hysteria --- no way to run a railroad!

There are some hard questions that Dr. Henry and Adrian Dix need to address now that we should have a reliable data base with which to conduct a post game analysis.
First Question: I know this sounds cold but needs an answer: how many of the deaths were people who already had health issues? How many were people already confined to care facilities? How many 'life years' were actually lost at the time of death? How many people died 'with' covid-19 rather than 'from' covid-19? How many people who had been infected had mild to no symptoms? How many had flu like symptoms which they simply rode out and carried on? How many actually required a hospital stay to deal with the infection? What actual treatment was offered to those who were infected, but didn't need hospital time? What treatment was given those in hospital? Were any anti malaria drugs used as a treatment? If so, what were the results? If not, why not?
Second Question: How many cases of cancer have gone undetected as a result of a single focus health system? How many people have died of heart health issues because of cancelled life saving procedures? Why were hospitals operating well under capacity during this event? How many people have had to deal with pain and discomfort because of cancelled knee surgery? This is but a few examples of what could be called collateral damage resulting from the myopic approach to health care delivery these past months.
Third Question: How many infections and deaths could have been avoided by shutting down care facilities and isolating the high risk population? What kind of analysis was done as to the overall health effects that a failed economy would cause? Stress is but one of the most likely results of the shutting down of nearly all economic activity. How do people feed, cloth and house themselves if suddenly they have no income? How much more damage has been done as a result of domestic violence and increased alcohol consumption? Suicides?
I can clearly remember at the start of the shutdown someone saying to Dr. Henry and or Adrian Dix that an eye surgery had been cancelled. This meant the person was likely going to lose their sight. Adrian Dix commented to the effect, he sympathized but that we all had to do our part. I remember wonder at the time if he would have been so glib had it been his eye sight that were now in jeopardy?
It is noteworthy that everyone who decided to kill the economy and put the whole economy into a tailspin weren't suffering any of the consequences as the rest of the public. They didn't loose their jobs. Drain their savings account just to get by? Could they always pay their rent/mortgage etc. etc. They weren't really in it with the rest of us.
BC Covid Bonnie Henry Canadian household debt Covid Covid recession Covid Shutdown Fear mongering