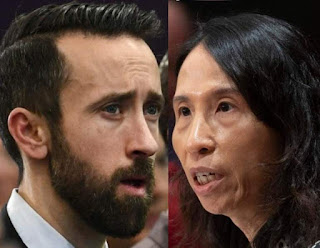 In a break from the usual milk toast approach from many Canadian polticians Conservative MP Derek Sloan struck out at Canada's chief health officer for her handling of the Covid-19 pandemic.
The rookie MP and Conservative leadership candidate released a video suggesting that Tam was "parroting" misinformation about Covid-19. He set off a storm when he asked if Dr. Tam was working for China or Canada and called for her firing.
He is not a stranger to controversy as he referred to LGBTQ as a liberal term and earlier had tweeted that he felt being gay is a choice.
To be a Conservative leadership candidate he would have had to put up an entrance fee of $300,000.00, $200,000.00 of which is non-refundable. The leadership race has been rescheduled from June to August due to the Covid-19 crisis with the use of postal ballot. The ballot must be received by Aug. 21 2020 to be counted.
Anyone wishing to sign up for the purpose of voting can do so until May 15 which has been extended from April 17.
The winner of the leadership race will replace outgoing Andrew Scheer. Derek Sloan is considered to be a longshot leadership hopeful in a race including long time member of parliament Peter McKay.
Derek Sloan MP Fire Tam Mishandled covid-a9