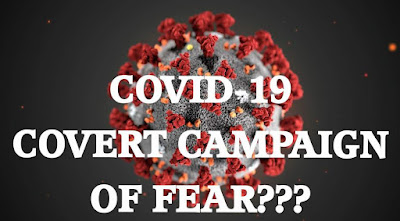 Only time and scrutiny of statistics
will tell ......
From the very beginning Covid-19 was being compared to the Spanish Flu Epidemic that is reported to have killed people by the millions. Images of a completely overwhelmed health care system were given as the basis for basically killing our way of life and economic system in a heartbeat.
We had to 'flatten the curve' was the mantra coming from public health officials all over the world as a world-wide quarantine was put into effect. Unless, a person's place in society was considered essential, they were told to stay in their homes for the good of themselves and society in general.
What are now proving to be grossly overstated models of potential death counts were hauled out to support the massive quarantine order. It puts you in mind of those Global Warming models paraded by Mr. Gore and company in the early days of that fear campaign. Flooded coastal cities and disappearing polar bears were replaced by deaths in the millions in the US alone.
The medical community is concerned the negative health impacts associated with the quarantine will far outweigh anything covid-19 caused. This concern prompted 600 doctors to sign a letter calling on the US President to lift the quarantine order.

Fear is a mighty force

Fear as described by Merriam-Webster: "an unpleasant often strong emotion caused by anticipation or awareness of danger".
Panic which often walks in lockstep with fear is described by Merriam-Webster as:
a: a sudden overpowering fright
also : acute, extreme anxiety
b: a sudden unreasoning terror often accompanied by mass flight
widespread panic in the streets
c: a sudden widespread fright concerning financial affairs that results in a depression of values caused by extreme measures for protection of property (such as securities)
The effects of both fear and panic could be seen very early on as toilet paper became more valuable than gold and silver, and even resulted in people coming to blows in supermarkets as stocks dwindled. Fear and panic do not result in rational thinking and the negative health impact is well documented by the medical community.

The fear that gripped the world led to a stampede-like response in the two-legged herd as toilet paper supplies were depleted overnight as were food supplies in supermarkets everywhere. The panic-buying led to a complete disruption in the supply chain as inventory was drained in nearly every category. Everything from toilet paper, to baking supplies, canned goods, dry goods and bottled water, just flew off retailers shelves as panic went through the entire herd.
The panicked herd put in place the perfect environment for elected and non-elected officials to take complete control setting aside most of the safeguards we had put in place to protect the people from their government.

In Canada the Prime Minister has seized the kind of powers we would normally attribute to tyrannical governments we used to despise. The fact there has been no meaningful opposition to this seizure of power, points to the complete failure of our system of government.
Covid-19 -- Covert campaign of fear ............ PART 1