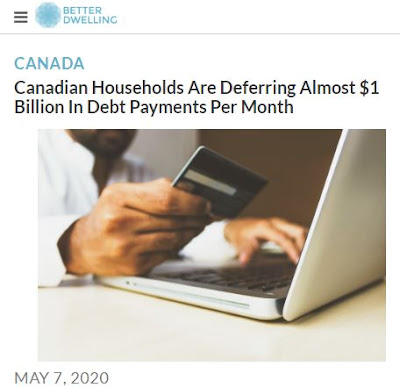 According to a report in Better Dwelling the Canadian Bankers Association reports from only 13 of their member banks indicate many Canadians are unable to meet their mortgage payments.
The banks for the most part are allowing payment deferrals which of course will be added onto the mortgage amortization and will be accruing more interest. The numbers being reported are only for a select number of banks and do not include many lending institutions which are likely receiving the same request.
There has also been 417,000 requests for credit card payment referrals, which is 44% higher than it was at the first of the month. This is from only eight lenders, so the total number would also be much higher.
Canadian deficit Canadian household debt