The God Canada Has Forgotten

Today is set before us Life and Death
Choose Life 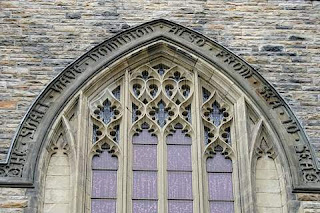 He shall have dominion also from sea to sea

Canada was founded by Christian God fearing men from the day that Cabot set foot on Newfoundland in 1497 to the day our faith was carved in stone at the Parliament buildings in Ottawa.

Newfoundland was the last province to join the Dominion of Canada (another example of Christian influence) whose motto is "Seek ye first the kingdom of God".

Since 1877 until 1994 the following prayer was recited at the opening of every Parliament giving due honor to the Lord Jesus Christ.

O Lord our heavenly Father, high and mighty, King of kings, Lord of lords, the only Ruler of princes, who dost from thy throne behold all the dwellers upon earth: Most heartily we beseech thee with thy favour to behold our most gracious Sovereign Lady, Queen Elizabeth; and so replenish her with the grace of thy Holy Spirit that she may always incline to thy will and walk in thy way; Endue her plenteously with heavenly gifts: grant her in health and wealth long to live; strengthen her that she may vanquish and overcome all her enemies; and finally, after this life, she may attain everlasting joy and felicity; through Jesus Christ our Lord—Amen.

Almighty God, the fountain of all goodness, we humbly beseech thee to bless Elizabeth the Queen Mother, the Prince Philip, Duke of Edinburgh, Charles, Prince of Wales, and all the Royal Family: Endue them with thy Holy Spirit; enrich them with thy Heavenly Grace; prosper them with all happiness; and bring them to thine everlasting kingdom; through Jesus Christ our Lord—Amen.

Most gracious God, we humbly beseech thee, as for the United Kingdom, Canada and Her Majesty’s other Realms and Territories, so especially for Canada, and herein more particularly for the Governor General, the Senate, and the House of Commons, in their legislative capacity at this time assembled; that thou wouldst be pleased to direct and prosper all their consultations, to the advancement of thy glory, the safety, honour, and welfare of our Sovereign and Her Realms and Territories, that all things may be so ordered and settled by their endeavours, upon the best and surest foundations, that peace and happiness, truth and justice, religion and piety, may be established among us for all generations. These, and all other necessaries for them, and us, we humbly beg in the name, and through the mediation of Jesus Christ, our most blessed Lord and Saviour—Amen.

Our Father who art in heaven, Hallowed be thy Name. Thy Kingdom come. Thy will be done on earth as it is in heaven. Give us this day our daily bread; And forgive us our trespasses, as we forgive those who trespass against us. And lead us not into temptation. But deliver us from evil—Amen.

Almighty God, we give thanks for the great blessings which have been bestowed on Canada and its citizens, including the gifts of freedom, opportunity and peace that we enjoy. We pray for our Sovereign, Queen Elizabeth, and the Governor General. Guide us in our deliberations as Members of Parliament, and strengthen us in our awareness of our duties and responsibilities as Members. Grant us wisdom, knowledge, and understanding to preserve the blessings of this country for the benefit of all and to make good laws and wise decisions. Amen.

Until 1994, no major change to the form of the prayer was made aside from references to royalty. At that time, the House concurred in a report recommending a new form of prayer more reflective of the different religions embraced by Canadians. This revised prayer was read for the first time when the House met to open its proceedings on February 21, 1994.

Trying to embrace all gods is our downfall

It is very clear from the opening prayer in use from 1877 to 1994 which God was being honoured. In 1994 in order to reflect all the other gods being embraced in Canada we have chosen to deny the only true God. The Bible clearly tells us, that if we deny Jesus before men, He will deny us before His Father.

We have fallen into the same error that the wise King Solomon fell to. King Solomon allowed his many wives to influence him and he allowed idols to be erected to the gods his wives worshipped. He forgot the God who gave Him the greatest kingdom to have been on earth to that time.

I doubt the founding fathers would have ever foreseen the day when temples and idols would be erected in Canada under the banner of religious freedom.